A Logic Life (How These Docs Live)

Sink or Swim: Don’t Let This Tragic Water Accident Happen To You

I was in Mexico. I was young, about 23 years old. I had a twinkle in my eye and my whole life ahead of me. One day, a friend and I went to the beach. We were wading in the ocean, about waist deep. In came some large waves.

Looking around, people were jumping in order to avoid being splashed in the face. The motion of jumping with the wave was both fun and relaxing. It was like the waves were carrying us in the most therapeutic way.

Oh, the waves were carrying us alright.

Mind you, I can swim. I have been swimming since elementary school. I was on the swim team at one point and even for a brief moment had visions of trying to train for the Olympics. I am the most confident and simultaneously the most insecure person I know. Ponder that. Back to my story.

The next thing you know, We were up to our necks in water. Literally went from standing waist deep, steps from the shore, to treading water and barely able to touch the bottom in a matter of fewer than 2 minutes. I also had left my glasses on the shore, but with my blurry vision, I could see people who looked like ants far, FAR away.

Now what do we do? Swim back? Tried it. It wasn’t happening.

We were seemingly unable to make it back to shore. And WE WERE IN THE OCEAN. I mean, I can swim, but for how long? Where were we going? What was going to happen to us? At least we would share this slow oceanic death when we were no longer able to tread water and began to sink in fatigue.

Out of seemingly nowhere appeared these young teenaged boys on surfboards. In Spanish, they told my friend and me to get on the boards. Now, I’m from Chicago. I don’t just jump on peoples’ surfboards who I don’t know. But wait, we were in the middle of nowhere in a very perilous position. My girl hoisted herself up on one of the boards. I guess we were about to take our chances with these young homies.

They started paddling and before I knew it, we were back to the shore. I was so grateful I could have church-hugged every one of them. They asked for money. They were volunteer lifeguards. I was broke. I hadn’t come to the beach with money. They got a series of thank yous and prayers. I think I dispensed a hug or two. If I could go back today, I’d give them a hefty tip.

What was the cause of this nearly life-threatening moment?

I was caught in a Riptide.  Also known as a rip current.

But, what is a rip current?

A rip current is a strong current caused by tidal flow in confined areas such as inlets and presenting a hazard to swimmers and boaters.

Recently on Weather.com, they were talking about the hazards of rip currents and their presence on the east coast in areas near tropical storms. They can be present anywhere, though. Even at low tide.

So what should you do if you get caught in a riptide or rip current?

According to the website theartofmanliness.com, If you get caught in a rip current, here’s what to do:

Don’t panic. Feeling like you’re getting swept out to sea can be terrifying. But try to keep calm. Rip currents won’t pull you under — they’re just channels of moving water. And while they can extend a ways out, they do eventually dissipate, most within 50-100 feet of the shoreline. So you’re not going to wash up on the shores of a deserted island with only a volleyball for a friend.

Swim parallel to the shore. Instead of swimming against the rip current, you want to swim perpendicular to it, in either direction. Rip currents are typically only 20-100 feet wide. Once you leave the rip, swim at an angle away from it towards the shore.

Go with the flow. If you don’t have the swimming skills or energy to swim out of the rip, float on your back and go with the current. Just imagine you’re taking a spin on the Lazy River at the water park you went to as a kid. Once the rip current dissipates, you can do the parallel swim thing or try to signal to the lifeguard or someone else that you’re in need of help.

Thank you The Art Of Manliness for contributing to this women’s health blog. The irony.

While we’re at it, what do you do if you get caught in an undertow?

In Chicago, we love Lake Michigan. For years, Lake Michigan was known as one of the deadliest of the Great Lakes because of the currents. An undertow is a misnomer that comes from the sensation that a person’s feet are pulled out from under them during the rip current. The water is actually not pulling you under, it’s still out. An “undertow” is a rip current too.

The best way to avoid this is to NOT SWIM in areas where “no swimming” signs are present. Also, avoid water deeper than 3 feet if you can’t swim as an adult, or 1 foot if you’re a child. Do not wade or swim when there is not a lifeguard present. Don’t be ashamed to use life vests. Make sure they are properly sized for the adult or child’s weight. A child can slip out of a vest that is too big, or not float properly with a vest that is too small. 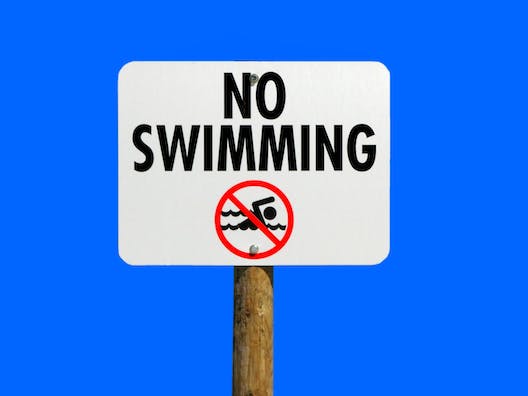 Remind children who can’t swim the entire length of a swimming pool without touching the bottom that they CANNOT swim well enough to survive in the lake or ocean.

You aren’t trying to crush their confidence, but a child who THINKS they can swim because they can paddle 2 or 3 times and bounce their feet off of the bottom can find themselves in trouble when there IS NO bottom. They’ll PANIC, THEN SINK.

I had never heard of a rip current before I got caught in one. If you know about it, you’ll know what to do if it happens to you. Already in 2018, there have been multiple deaths and countless rescues on Florida’s Eastern and Southern coasts in the US due to rip currents. Share this with someone. It could save someone’s life.

Categories: A Logic Life (How These Docs Live), GYN, Social-Logic