Diastasis Recti: 5 Things You Should Know So It Doesn’t Happen to You

Yep, that’s me and my three kids.

Two on the outside and one still in my uterus. And no, I don’t have Diastasis recti anymore. I just have a small umbilical hernia that made my “inny” turn to an “outy” for about nine and a half months. No band-aid in the world was going to hold that back. I had Diastasis during my pregnancy, but I don’t have it now, 2 years later.

How did I get rid of Diastasis Recti? Let’s get right into it.

First, if you don’t know me by now, I love to run the numbers. If you could hear how many of my patients are asking about Diastasis lately, you would think that it affects 100% of pregnant women. It doesn’t, at least not longterm. And while we are on the subject, let’s practice saying it so that you can ask about it with confidence.

DIE-UH-STAY-SIS. You got it. (You know how I feel about the pronunciation of medical terms.)

Diastasis recti (the full name is actually Diastasis recti abdominis or DRA) is around a 2-centimeter separation of the rectus abdominis muscles. The rectus muscles are the “abs”. Pictured below, they are the ones that give you the “pack” that you have, or in my case, want. 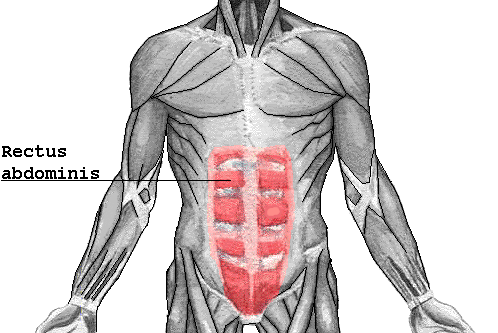 As the uterus grows in pregnancy, those muscles can separate. At 35-weeks pregnant, the prevalence of this degree of muscle separation is 100%. By the 6-month post-delivery mark, only about 39% or women have it. That number isn’t small, but it isn’t the majority.

So what do the 39% do to get their abs back? Well first, what is the problem with Diastasis? Some may get uncomfortable hernias that result from this separation. Some are even born with it and need surgical correction to keep the abdominal contents contained. The problem is often cosmetic though.

Some may experience core weakness after childbirth and if not corrected, can find themselves having difficulty lifting objects and having back pain. In that case, the problem isn’t necessarily the Diastasis. The core weakness is the problem. It is VERY NECESSARY to do proper exercises to not worsen the separation, but still strengthen the abs.

If you suspect that you have persistent Diastasis after about the 8-week mark after having your baby, first do this: Lie flat on your back and do a half crunch. If you can fit 2 fingerbreadths between your abs, you may have it. The actual process for diagnosis is more technical than that, but this works for at-home use. Those most likely to be affected are women who carried twins or other multiples, women who have larger babies, women who are over 35 years old,

Here are my 5 Must-Knows.

At the end of the day, know that your abs will go through changes due to pregnancy.  Stay optimistic that you can be beach-ready again if you so desire.

Don’t forget to subscribe to always know when we’re busting myths and dropping science at The Gyneco-(b)Logic.