You Should Never Get These Three Cancers: Here’s how to protect yourself.

If you have had the chance to pick up my book, It Smells Just Like Popcorn, that breaks down medical things in plain speak (THANK YOU!), you may have come across the section about Cancer:

Here is a excerpt about WHAT CANCER IS…

Cancer is not an alien beast that finds its way into your body. Cancer, generally speaking, is caused by rogue cells of your own body. Our whole body is composed of cells, tiny building blocks with specific functions that work together. When a few cells decide to do their own thing, it is like a mutiny. I recently watched Guardians of the Galaxy 2. *Spoiler alert*. When Yondu’s crew was overthrown by Taserface, they killed all of the loyal crew mates by tossing them off of the ship into the vacuum of space.

Taserface was like a cancer, turning the formerly good crewmates against Yondu.

If we keep with the cancer analogy, what would have then happened is the newly corrupted crew members would have started multiplying and forming new corrupt crew members like that agent in the black suit with the earpiece in the Matrix. Eventually those crew members would multiply beyond capacity, use up all of the resources, food and water on the ship, and everyone would die.

The way that chemotherapy works is that it targets the cells that replicate quickly.

Cells that rapidly divide and multiply use certain building blocks that chemotherapy and radiation can target and attack. Hair follicles have rapidly dividing cells, which is why people lose their hair during chemotherapy.

There is also a component of cancer that results from a deficiency in eliminating malfunctioning cells. Let me try that again. When cells don’t function well, there are proteins that are supposed to cause those cells to die. It’s like a gardener who pulls up weeds and prunes rogue branches on bushes. If the gardener isn’t working well, parasitic weeds can overgrow and overtake the whole garden. Good luck to your delicate herb garden when big chunky weeds go unchecked.

The weed analogy gives the visual, but just to reiterate, the cancer cells are not foreign. They are cells that were at one point functioning normally in your body who just decided for one reason or another to malfunction.

Okay, now that that we’ve gotten through that, (did you read it? Go back and read it. It’s interesting, I promise) we can get into the cancers that you should never get if you follow my instructions.

I’m not claiming to be able to stop cells from randomly and spontaneously going crazy. I am claiming that you can catch those rowdy, rabble rousing, troublemaking cells before they become cancer AND you can not PROVOKE certain cells to wile out! (To wile out means go crazy for those who don’t know.)

Yep, I use a speculum and a swab to take samples of cells from the cervix. Those cells ring train crossing bells in the pathology lab that tells me to tell you that cancer is coming. Those bells allow me to tell you what is happening on your cervix WELL before you get cervical cancer.

Is that the only way?

The short answer is YES.

YOU can almost never see, feel, smell, taste or know about cervical cancer before it happens. It is a microscopic change that happens almost universally as a result of HPV exposure. Even with the HPV vaccine, a woman can still contract this virus. The vaccine helps reduce exposure though, don’t get me wrong. Even condoms don’t eliminate exposure to this virus. EVEN if you are abstinent and never, ever, EVA had sex, there is a small percentage of cervical cancer that occurs spontaneously. It occurs slowly, though. Very, very slowly.  Go see your gynecologist and get your Pap test and you will, almost certainly NOT get cervical cancer.

It is National Colon Cancer Awareness Month. I am going to send this to topic over to my better half, Dr. Ed McDonald of The Doc’s Kitchen, as this is his specialty. I will say this small piece, though: Colon cancer is a lot like cervical. Those cells start changing slowly and can often be caught well before they become cancer if you get your colon cancer screening- your colonoscopy. That screening should start at 50 years old for many, at 45 years old for African Americans, and for you, 10 years younger than your closest relative was if they developed colon cancer. Take it away, babe.

It’s a stool. Get it? He’s a Gastroentereologist…

Sure there are circumstances, like asbestos exposure, or exhaust or other environmental and work exposures that can increase lung cancer risk, but you all know what I plan to cover here: SMOKING.

Yes, those little monsters are like whoever that was that Roberta Flack sang about: Killing you softly, only there is no song. It has been the goal of the TRUTH campaign for years to reveal the dangers of cigarettes, and cigarette use has gone down. Horray!

Don’t worry, doc. I just use a Vape Pen. 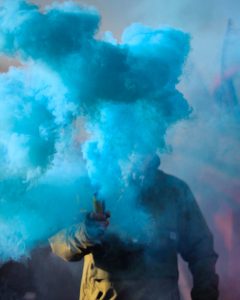 Well, my friends, congratulations on not inhaling the carcinogens (cancer causing ingredients) of traditional cigarettes. Unfortunately e-cigarettes have a whole host of carcinogens of their own- formaldehyde being a big one. The jury is still out when it comes to how and what components of e-cigarettes may affect your health, but we know that in addition to cancer-causing formaldehyde, the lung disease Bronchiolitis Obliterans, or popcorn lung is caused by diacetyl, an ingredient in some vape liquids.

The chemical can cause a dry cough that won’t go away. It also causes shortness of breath, wheezing, headaches, fever, aches, and other health problems. The vapors also can irritate your eyes, skin, nose, and throat. Here is the reference.

We may not have the full story until 10-15 years from now. This is especially scary since teen vape use is spreading like wildfire (no pun intended).  If you are a user of a Vape pen or any other electronic nicotine delivery system, at least check out this website by the FDA to make sure that yours meets safety regulations, that you aren’t charging it improperly and that the liquids you are using are reporting the ingredients properly.

Any cancer can sneak up on you, but the ones above sneak about as well as my toddler, who runs like an elephant and yells “Moommmyyyyyy!” all of the way down the hall. Don’t be surprised by a cancer that you can possibly avoid or prevent.

Okay, this is creeping me out.  But think of it like a cancer you want to avoid and RUN, to your doctor (and away from smoke).